How to proceed smoothly through a separation or divorce 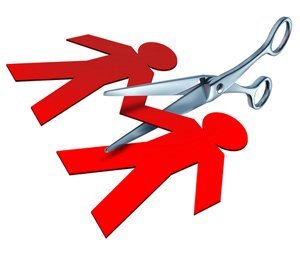 The decision to separate or divorce is a very difficult one to make, particularly if children are involved. In any separation and divorce, there are complex issues to sort out, including child custody and access to children (visitation), child and spousal support, division of assets, property and debts, business issues, and other issues. We have the experience and knowledge to help you proceed smoothly through your separation or divorce.

Separation means to cease living together and conducting yourselves as spouses, with the intention not to live together again. This may include situations where you continue to live in the same residence for the time being, but “separate and apart under the same roof.” The intention to separate need not be joint and mutual, but one party must withdraw from the matrimonial relationship with the intent of permanently ending the marriage.

Divorce is the termination of the legal relationship of marriage between spouses due to the breakdown of marriage, based on the grounds of any one of the following:

Although all of these grounds of marriage breakdown are available, the commonly used one is separation for at least one year preceding the granting of the divorce order. Please note that you may commence an application for divorce at any time after separating, even if you have not yet lived apart for one full year.

The Divorce Act encourages attempts at reconciliation by allowing spouses to cohabit for a single period, or a total of several periods, amounting to no more than 90 days without interrupting the one-year separation period relied upon to establish the breakdown of marriage.

To apply for divorce, either spouse should be ordinarily resident in Ontario for at least one year before the commencement of the divorce proceeding. It means that the party claiming a divorce can rely on his or her residence in Ontario or the residence of the other spouse in Ontario, to obtain a divorce in Ontario.

Either spouse may apply for divorce as early as the day after separation begins, but the final divorce order cannot be granted by the court until one year of separation has expired.

In an uncontested divorce, it takes approximately 3 to 4 months before your divorce will be finalized by the court, but there is no guarantee about timing. If the client is planning to remarry, the client should not make any definite plans for a specific wedding date until receiving the final divorce order from the court.

When the client and spouse cannot come to an agreement regarding more complex issues of their divorce, or if they have competing claims, they may require negotiation or legal representation in court to reach a resolution. The Howard Nightingale Professional Corporation family law team is sensitive to the client’s unique situation, and will protect their interests as aggressively as necessary. If the client is required to go to court for a contested divorce, the client will want Howard Nightingale Professional Corporation’s experienced family law litigation team on their side.

The most common domestic contract negotiated between couples is a separation agreement. To enter into a separation agreement, you and your partner must have cohabited and must now be living separate and apart. However, couples who continue to live under the same roof may still be considered to be living separate and apart if they are living independent lives.

Separation agreements deal with custody and access to children, financial support arrangements, division of property, and estate considerations. However, be aware that a family court may disregard provisions in a separation agreement regarding children, where it is in the best interest of the children to do so.

Whether it is a marriage contract, cohabitation agreement or separation agreement, to be considered a valid domestic contract in Ontario, the following conditions must be met:

Amending or Setting Aside Domestic Contracts

Due to the court’s power to set aside agreements, parties should not enter into agreements for which there has been little or no financial disclosure. In addition, parties should be wary of signing a domestic contract when one party refuses to obtain independent legal advice from a lawyer regarding his or her rights and obligations under the contract.